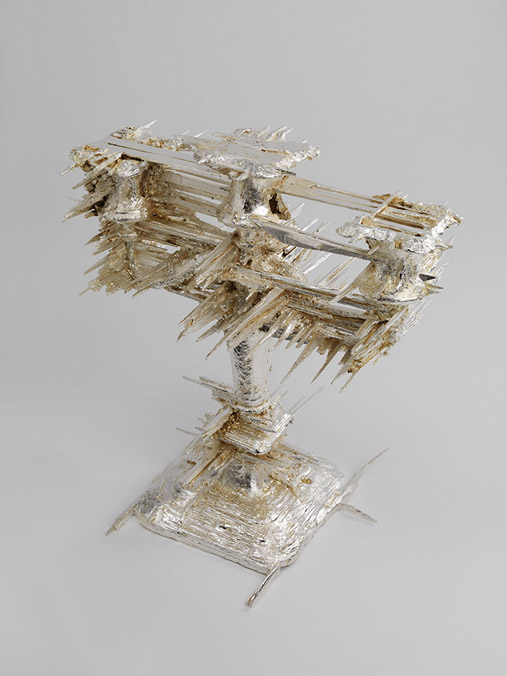 Shine was created by a process that uses digital techniques to investigate the reflective properties of a metallic object; in this case the subject was a Victorian candelabra.

A planar 3D scanner was used to document the reflective information, which was in turn used to create a rapid prototyped form, which has been cast. When scanning a metallic object the laser beam is unable to distinguish between the surface and the reflection;
the spikes represent the intensity of the reflection. This piece renders the impossible, encapsulating the beauty that exists above and apart from the material world.

Purchase for the Crafts Council Collection (2011) supported by a donation from Victoria, Lady de Rothschild

Mann is a Scottish artist, designer and lecturer whose fascination with transposing the ephemeral nature of time and motion has created a studio
practice that challenges the existing divides between art, craft and design. He has exhibited in national and international venues including MoMA, New York, International Bombay Sapphire Awards, London and Milan, Jerwood Contemporary Makers, London, MAD, New York and the European Glass Context in Denmark. In 2008, Mann was awarded the World Craft Council Prize for glass and in 2009 won the Jerwood Contemporary Makers prize. Mann’s works are included in the MoMA, New York, Design and Architecture collection and MAD, New York, Design and Applied Arts permanent collections.