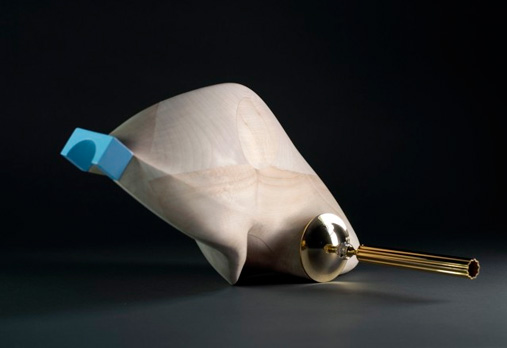 The Lost Twins Ornament series represents early experimentation with the possibilities CAD and rapid prototyping can offer the maker. Committee chose incongruous pairs of mundane objects and proposed that a CAD form be produced to link the two. Once scanned and mapped
into a 3D image, Committee applied their limited I.T. skills to produce arbitrary guidelines between the two objects to dictate the way the new form would morph between them.

The resulting sculptures exploit the complex new shapes that were previously unconstructible or even inconceivable without the aid of a computer, and question the futuristic aesthetic enabled by digital technologies.

Committee is run by Clare Page and Harry Richardson, who met whilst studying for Fine Art degrees. Since that time they have studied the crafts of machine knitting and hand-crafted cabinet-making respectively, developed a derelict space in Deptford into an ad hoc studio and gallery, before beginning to work within the design industry for companies such as Topshop, Moooi, SCP, Lladro and The Rug Company. Committee has come to design products as varied as lighting, rugs, ornaments and chairs, textile and wallpaper, whilst also maintaining a studio practice that produces self-initiated works, which follow their own academic interests.